via Wedger’s ‘Foxy’ story: Not the cover-up he claims

Please click the above link, read & check the comments and share widely, this matters alot.  Given that he was involved with the Chris Fay fake output that was mentioned earlier in the ongoing Westiminster IICSA inquiry, there must surely now be some way to stop these fake whistleblowers made easier.

via Fay & Maloney: Lies versus reality

The amount of money, resources, energy diverted by Chris Fay, Bill Maloney and many others, may never be fully measured.  The inquiry is now unravelling the lies told, viralised online by connected groups and internet hosts.  In the planning stages of the inquiry, Bill, Belinda McKenzie and others pushing the Satanic agenda attempted to infiltrate and steer, putting pressure on many with their email campaigns.

Glcik the link to read & subscribe to Hoaxtead Research for updates on all developments regarding the pepetuators of SRA & CSA/CSE hoaxes.   Many commenters focus on different aspects or groups who are watched, evidence collated and many a joke cracked as we try to rake the fakes out of the child protection arena.

Though, Old Farts or Fakes would be a better description, given that their line up and backers are the same types organised by Penny Pullen (FSF Director) and Belinda McKenzie to hijack the 2010 UK Anti Child Abuse Rally:  Kevin Annett, was promoted, so was Robert Green (who despite a lifetime restraining order, is now backed strongly by ex cop Jon Wedger & co)……but then ex cop Ray Savage, ex cop who early promoted the Hampstead Hoax was HopeGirls #QEGScam boyfriend around the time the hoax was kickstarted, they met at the Sasha Stone UK tour 2014 (He tried recently to promote the hoax at his ITNJ)  Is Sasha Stone the new Kevin Annett? A journey down the rabbit hole

Bill, Belinda McKenzie and others infiltrated and tried to sabotage IICSA in it’s early days, along with Malcolm Blackman (aka Joe Public, ex 4channer and RIPTroll)… OpDeatheaters, like Wesley Hall, Jake Clarke who collaborated with pedophilesdownunder (prev: pedohuntersdownunder, to attack survivors during the Royal Commission Aus & sabotage it via their satanic scammer; Fiona Barnett (aka barnyard) and David Shurter, who is massively supported by Angela Power Disney who prays daily for him with her latest (well, openly anyway) sycophant and survivor basher;  Naima Dawn Feagin aka HopeGirl #QEGScam.

HopeGirl has maliciously struck channels that expose her frauds/scams/lies and is working hand in hand with David Scott, Cat Scot (FSF Directors) and Malcolm Konrad Ogilvy, chief last pusher of the hollie hoax and vile abuser to women and CSA Survivors: Click link below for Hoaxteads moronic lies and bs, as she projects her venom, some more, for her friends, from the safety (she thinks) of her Moroccon scam house.

Other Freemen of the land types attended the hampstead event to harrass and bully the community March 2015 (watch till end).

And David Icke who also rocked up at our rally 2010, which had been organised for CSASurvivors/victims and true supporters to speak, but was hijacked in the last weeks, he promoted the Holliehoax and other fake satanic panic mongering stories and is responsible for causing much harm, not least his support of Zen Gardner (though at the time, the troofers had big conferences planned), which failed 🙂

The Fresh Farts (Old Farts) lining up to keep their vile false flags alive (their YouTube Channel), below.

They are following the same pattern of dismissing real inquiries and attempting to hold their own Grand Jury (FMOTL) style kangeroo courts:  Is Belinda planning a kangeroo court?    bullying victims/survivors and groups that won’t follow their lead down the rabbit holes and into madness.

So not really Fresh Start is it?….. but an attempt to re kickstart their failing, foul false flags that undermine genuine survivors and inquiries, investigations and by now, there is so much proof and evidence of their vile bullying, attacks, threats towards anyone who won’t repeat their fictions, fantasys, frauds and scams.

Cat Scot (FSF Director: Catriona Selvester aka WildCat, Cat Sidh, calamiTcat, spidercatwebblog) with her vile posts smearing as many strong, vocal survivors that expose her disgusting abuse as she can:

HopeGirl in one of her many fake names and accounts shows even more clear evidence of collusion with the Hampstead & Hollie Hoax promoters.

So called christian Tribal Diva wellknown QEG Scammer (HopeGirl) shows herself up, loving to mock a CSASurvivor,  the fave pastime of paedos and their supporters/protectors/apologists:   HopeGirl, aka Naima Dawn Feagin aka Naima Morris aka Hope Moore of Morocco (where the two children were tortured and OPPT operators lived and other quack therapists)….  previously HopeGirl aka Tribal Diva appeared on  CCN with  Hampstead Hoax chief early promoter Melani Vermay or Mel Ve, later  HopeGirl can be seen partnering Angela Power Disney…… and she was previously partner of Ray Savage, the bent ex cop who aided child abusers Abe Christie and Ella Draper and chief hoax organisor Belinda McKenzie of Highgate.  Coincidentally, Ray Savage hosted the QEG Scam UK launch in 2015.

As Doazic rightly says, people have the right to know the past history of HopeGirl and the QEG which has never worked and never will, yet still she sells it, which is fraudulent behaviour.  I have been reporting her videos and encouraging others to, with good reason, to protect gullible or vulnerable people from her scamming lies…. She, on the other hand is being purely spiteful and malicious, plus aiding Satanic Panic mongers who she helps because they help real child abusers get off.

HopeGirl appeared with Angela Power Disney and prayed for David Shurter (self confessed baby rapist/murderer) & supports the person behind this spate of similar attacks on survivors downunder, 2yrs ago :

I’ve reported the videos, sneaky scammer Naima Dawn Feagin has used a throw away channel for her dirty tricks campaign, but as she is also using another fake name naima morris to take down channels, maybe YouTube will catch on, if not, I’m certain that investigators will take a keen int, erest. 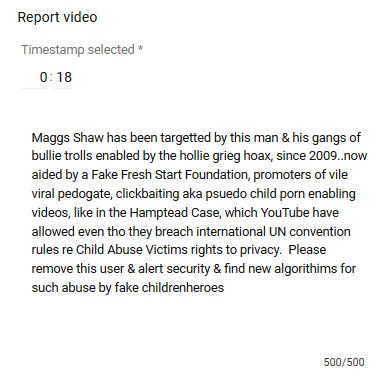 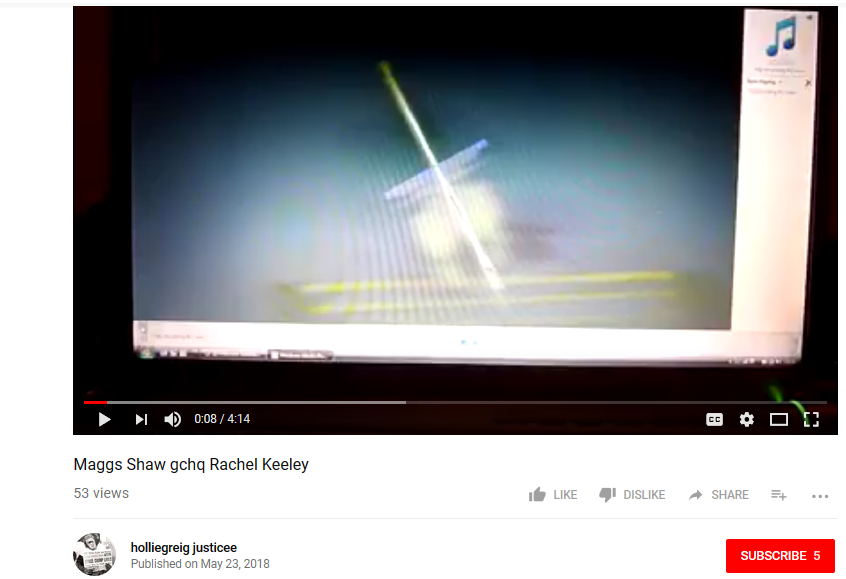